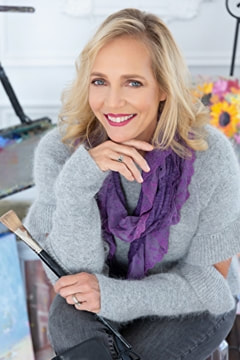 Jennifer's work is far from ordinary. Her unique way of using a brush and knife are revealed in the brushstrokes of each piece.  What she tries to accomplish in each piece is to define its unique "feeling" with the setting. Was it windy? Was there a crowd? Was there silence? What was the mood of the artist, as well as the mood of the subject matter? So many thoughts, and yet so many moments of meditation.
​Jennifer uses a large brush to lay in initial color patterns, then switches to a knife, and smaller brush, and maybe other tools at hand, even fingers, to move paint around where she wants to soften a line or harden one. It is a fearless method of painting, as she makes quick decisions with her tools.
Jennifer's influences for her subject matter relate to her life, and what she is experiencing. She grew up a cowgirl on a farm riding and breaking horses, barrel racing, polo player and then a horse jockey for several years. She loves to travel and every place she visits inspires her to paint new subjects, or stories. Focusing on the influence of the light and the colors, or tonalism. ​
Her main goal is to put a magical piece of beautiful artwork in your hands that you will cherish for this life, and others in future lives. This pursuit is a constant goal and she says "A path with no end." So, the adventure begins.