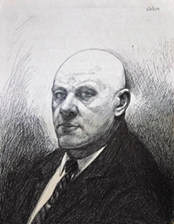 I don’t paint what I see in the glorious heavens
even when the sun, Oh dear giant! Is full of fires,
or when the moon is in its crescent states
dressed with pretty whites an a softy blue.

I don’t paint the oceans when the night is deep
even when its waters are burst with lonely dreams,
of small fish and some others very big
anxiously looking for the hidden pray.

I don’t paint men, when they’ve turn into wolfs
killing each other in many nonsense wars,
spreading their blood and their useless bones
fighting for gold and its ephemeral trick.

I don’t paint the black crows in their ethereal dance
lurking in the prairie for some little mice,
who can’t see the dark mighty guys
grasping his life with their precise attack.

I only paint what I keep in my mind
the things, only I saw and no one else could find,
where no one witness my foot prints in the trail
where I leave my breath and pieces of my soul.

Only time and its never ending march
would like to steal the hours that I find,
in which I loose myself not knowing the end
nor the beginning, cause there, is where I am in peace.

You should see there, the blue skies so clear
and the stars gleaming its lights from so far,
or the changing waters turned into wheat
moving like a blowing wind dance.

You might see the woman with no old garments
looking with her dark eyes a lovely sunset,
she speaks wit eloquence  about herself
but she doesn’t need words to say whom she loves.

The truth is that, I always look close to my destiny
where no one can see or take something from me,
I think I found the place where I can be
cause I see myself smiling every time I go there.

Born in 1956 in Bogotá Colombia , Valero is presently at the peak of his creativity. He studied at the National University of Colombia school of Fine Arts and then he went on to perfect his skills at the Royal Academy of Fine Arts of  San Fernando, Madrid Spain.  He begun collecting awards while an exceptional student and continued throughout his first exhibitions in 1972-74, wining his first major prize as a muralist with his painting entitled “ Iniciado Solar “ in 1981. In 1986 his work merited an honorable mention at the contemporary International Art Canter in Paris, France, and  two years later he won the Silver Medal at the International Painting Salon Grand Prix D’Aquitane in Tonneins, France.
His solo shows include exhibitions in Madrid, Spain; Bogotá and Cali in Colombia; Fort Lauderdale, Key Biscayne, Bay Harbor Islands, Coral Gables in Florida; Whittier, California; Bridgehampton, NY between 1971 and 2017.
His group shows include exhibitions in Bogotá, Tunja, Manizales and Santa Marta in Colombia; Madrid, Spain; Paris and  Tonneins, France; Montecarlo, Monaco; Santo Domingo, Dominican Republic; San Juan, Puerto Rico;  Miami, Miami Beach, Coral Gables, West Palm Beach, New York, Los Angeles, Pasadena, Sag Harbor and Bridgehampton in the U.S.A between 1971 and 2017.
He has received more than 140 portrait commissions. His paintings and portraits are in private collections in Bogotá and Cali, Colombia; Caracas, Venezuela; Madrid, Spain; Hong Kong, People’s Republic of China; San Juan, Puerto Rico;  City of Panamá, Panamá; Miami, Coral Gables, Key Biscayne, Fort Lauderdale, Boca Raton, Miami Beach, New York City, Glendale and Whittier, CA in the U.S.
His permanent public collections include the Rayo Museum in Roldanillo, Valle, Colombia; The Musee de la Commanderie d Unet in Tonneins, France;  The NSU Museum of Art of Fortlauderdale, Fortlauderdale, Florida.
His work has been published in selected art magazines and reviewed by authoritative art critics in Bogotá, San Juan, Miami, New York and Madrid.
Currently Valero is represented world wide by Richard J Demato Gallery of Sag Harbor, NY.
Artist Website