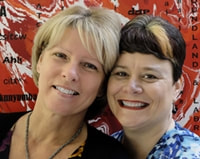 AM² Fine Art is a collaborative partnership that combines two distinctive artistic styles and mediums on one canvas, creating a new exponentially unique original work of art.

Artists Andrea Mercier and Arlene Murphy, BFA began collaborating as a result of a joint exhibition called Fire and Ice, which opened in August 2016 at the Leamington Arts Centre in Leamington Ontario. At the time they were presenting as two individual artists with completely different styles, mediums and intentions. They wanted a way to visually align the themes of fire and ice and decided to create an original painting together.
The resulting painting was titled “Marine Maneuver” and it created a sensation, including a media interview with a local newspaper. This one piece of artwork ignited a vision to have an entire exhibition of collaborative work, resulting in Co’llusion Art Exhibit which was unveiled June 2017 at Art Speak Gallery in Windsor Ontario.