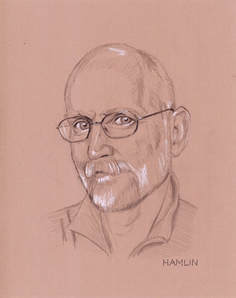 A native New Englander, Steve Hamlin has lived in western Massachusetts most of his life. For the past thirty years, he and wife Linda have lived in the tiny rural community of Huntington in the eastern foothills of the Berkshires.
Hamlin has painted since childhood, until recently always in watercolor. Over the past several years, he has also worked extensively in graphite and experimented with acrylics and pastels. Mostly self-taught, Hamlin has been influenced by many artists, both contemporary and deceased. Among them are Winslow Homer, Arthur Guptill, John Pike, Frank Rynes and Mike Sibley. Hamlin’s work reflects three life-long passions: nature, history and architecture.