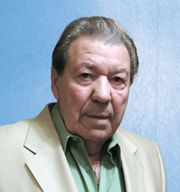 Ralph Garafola critically acclaimed artist, educator, and author was raised in Sheepshead Bay, Brooklyn. He and his family moved to New Jersey in 1964 and since 2001 spends the winters in Florida.
Garafola started his career as a draftsman in New York City for Armor Engineering. Later Garafola worked for Design Service in Newark, NJ as an illustrator producing government training manuals for the Armed Forces. Afterwards, he was promoted to Art Director. He worked there until he was drafted in 1953. Subsequently, he studied drawing at The Alliance Art School (Educational Alliance) in lower Manhattan at night.
Garafola, a Korean War veteran was in the army for two years as Army Combat Photographer MOS. He studied at Fort Monmouth New Jersey Army photo school; graduated and transferred to the Pictorial Center, Long Island City as a photographer making training films for the army. While stationed in Korea Garafola was a draftsman. He was discharged in 1955.
Back in New York, Garafola studied at the Art Students League of New York over seven years with Frank J. Reilly. He served as a class monitor to Reilly, who was an instructor at the League and Commissioner of Art for New York City.
Garafola worked at Janal Studio in Newark as a commercial illustrator. At that juncture, he then went out on his own and for more than 65 years he made a successful living as a self-employed commercial illustrator, photo retoucher, and fine artist. Garafola retired as a commercial illustrator and continued painting. He brings his style of contemporary realism to his oil and watercolor paintings of portraits, landscapes, seascapes, still life and pets. Garafola travels throughout southeastern United States plein air painting and Italy, France in search of new subjects and locations for future paintings while studying the works of the Old Masters.
At 70 years of age started teaching at the duCret School of Art, Plainfield, NJ and in Florida at the Sarasota Art Center, Longboat Key - Ringling College of Art and Design, the Art Center Manatee and Art Expressions by the Bay in Sarasota. Garafola also has students he tutors privately.
Website